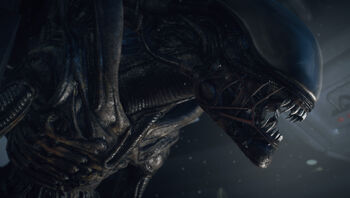 The Xenomorph is a fundamentally violent creature - unlike other science fiction stories featuring aliens with heightened technology, the Xenomorph seeks only to multiply, destroying all inferior lifeforms and creating a predatory environment.

The Xenomorph species is eusocial, acting within a caste system underneath the Queen, who breeds the lower castes for specific purposes. Biologically, the Xenomorph reproduces by forcibly implanting its young into the chest of a host, willing or not. After a brief gestation period, this offspring erupts through the chest wall of the chosen host.

The Xenomorph is a warring society, and their biology is designed specifically to kill. In addition to their highly acidic blood which can be spit over long distances, their extremely strong carapace (designed specifically to withstand the acidic internal environment) creates both an incredible defense against weaponry and an incredibly powerful offense in the form of claws and spines.

Additionally, the Xenomorph has a blade-tipped tail, segmented and muscular like a scorpion. How exactly the Xenomorphs see is unanswered, as their eye sockets are empty and small; their response to sound and their viewpoint as shown in later works suggests some sort of small-aperture micro-eye working in tandem with rudimentary echolocation.