The Working Joe class of android is a principal enemy in Alien: Isolation.

"Working Joe" is a line of synthetic humanoids created by Seegson Corporation as a low-cost alternative to the more sophisticated androids of Weyland-Yutani and other corporations such as Hyperdyne Systems. Unlike their brethren, the Working Joe is intended to appear obviously artificial: Hairless, with glowing lenses for eyes and no individual distinctive features. Some have compared the Joes to crash test dummies.

Though intended to serve the crew and civilians of Sevastopol, they are subservient to the directives of the APOLLO Central A.I. and the corporation issuing the A.I.'s priorities.

The majority of Working Joes are the standard model, identifiable by their industrial overalls.

"I will find you, you know."
- Hazardous environment Working Joe synthetic

Also present on the station is a slightly more advanced model wearing full body hazardous environment gear. This android, known colloquially amongst players as the "Raincoat" Joe, is most often encountered around APOLLO's core and Reactor Maintenance. 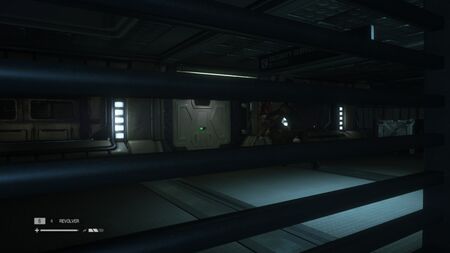 The Working Joes operate in two modes, identifiable by the colour of their optics: 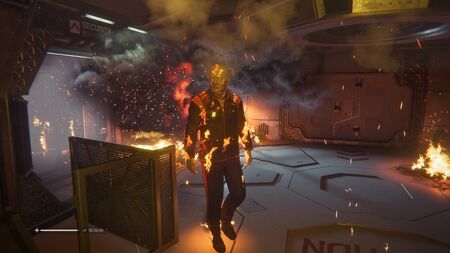 Working Joes are surprisingly resilient. Attacking at hand-to-hand range is very risky; a regular Joe is dextrous enough to catch most swings with a maintenance jack and punch back while holding the player in place.

Striking with a stun baton will temporarily short a regular Joe out, allowing the player to continue disabling it through other means. Similarly, the EMP mine will cripple any Joes in its blast radius.

Shots from a revolver, even to the head, are unlikely to do destructive damage, although two to four headshots will typically bring a standard Joe down. A shotgun is a better choice when available. A flamethrower or Molotov will set a Joe alight but will not kill it immediately; a burning Joe will continue to be combat effective for a short while before the fire destroys it.

Hazardous environment Joes are much tougher; EMP mines, flamethrowers and Molotovs will have little appreciable effect on them. However, two Pipe Bombs are enough to take one down.

The most effective anti-Joe weapon is the bolt gun. Though it takes time to load and aim, the bolt gun will down any Joe of either variant with a single clean headshot.

Working Joes and the Alien[]

"Uncategorised species. What are you?"
- Working Joe synthetic

If the Alien and a Working Joe encounter each other, the event is surprisingly mundane. While the android will most likely enquire about the Alien's nature and state that it is logging its presence with APOLLO, neither the Alien nor the Joe will interact with each other directly.

Despite any programmed safeguards, a Joe will not act to protect the player from the Alien.

Once the Alien was loose aboard the Sevastopol, APOLLO requested a comprehensive report on the station's well-being. Seegson Working Joe 937, designated as "Chuck", reported that he had "received multiple notifications of civilian trespass and vandalism on Seegson property. Since the incident, there has been a marked increase in civil disobedience."

In response, the A.I. launched a defensive protocol, which continued through the presence of Amanda Ripley and the crew of The Torrens.