The Nostromo was a spaceship in the movie Alien. The events aboard that ship directly impact the plot of Alien: Isolation.

The Creative Assembly have also recreated parts of the Nostromo shooting set and extrapolated other sections of it for the Crew Expendable and Last Survivor items of downloadable content for the game.

The commercial towing vehicle Nostromo bore the registration code 180924609. She was an M-class star freighter owned by the Weyland-Yutani Corporation capable of towing large payloads between star systems.

During 2122, she was hauling a payload of oil in a mobile refinery from Thedus to Earth when she vanished without trace en route.

At the time of her departure from Thedus in 2122, the crew of the USCSS Nostromo consisted of:

The crew also kept a cat, Jones, aboard the vessel.

The Narcissus was the Nostromo's lifeboat and shuttlecraft. Though capable of interstellar travel, she bore hypersleep capsules for two crew only. 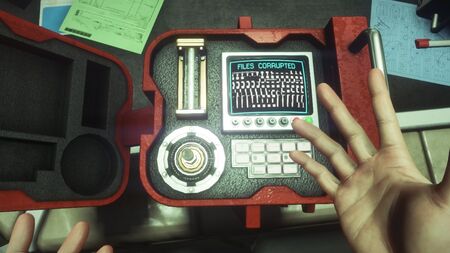 The Nostromo's flight recorder is the primary plot mover of Alien: Isolation. As the Narcissus bore its own flight recorder synced to the Nostromo's, we must presume that the Nostromo somehow jettisoned its own recorder immediately before the detonation of its engines and payload. This would imply the device is significantly shielded against blast forces and possibly radiation.

It also appears that, given the presence of Ellen Ripley's final report and personal addendum on the Nostromo's recorder, the device included a receiving antenna allowing it to accept additional log data from the Narcissus until the shuttlecraft passed out of transmission range.

The recorder floated in space until the vessel Anesidora happened across it in 2137. After a detour, the Anesidora's captain took his ship to Sevastopol Station, using the recorder to convince Marshal Waits to break quarantine procedures and let his crew board.

When Amanda Ripley finds the flight recorder aboard Sevastopol, it is empty bar a few corrupted files. However, further exploration of the station reveals that a Seegson Corporation executive named Ransome had gained access to the recorder and was decoding it for his own purposes. Ransome spread the audio logs of the Nostromo's crew across the station in separate secure data units so no one would realise what he was up to.

Marlow himself kept a copy of Ellen Ripley's personal addendum to Amanda aboard the Anesidora, allowing Amanda access to it shortly before detonating the engines of his own vessel.