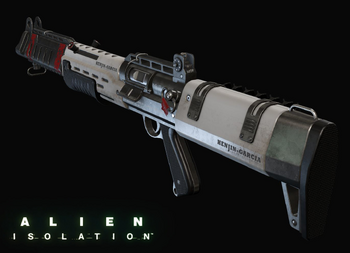 The Shotgun is a firearm weapon. Due to its high damage output, it's ideal for destroying Working Joes. It requires less ammo than the Revolver to take them down.

It has a reserve of four rounds and like the revolver, has a length reload time. The shotgun can cause the Alien to flinch for a moment, buying barely enough time to switch to another item to defend yourself. Aside from that, and given it has only four rounds, it is not effective defence against the alien.

The shotgun will not cause the Alien to flinch if it is already charging at Ripley nor will it flinch if it is advancing on her in the vents or emerging from vent hatches. Shotgun ammo is rare, with some scattered around the map and from dead bodies of Human survivors. Roughly fourty rounds can be found on medium difficulty.

Like the revolver, firing the shotgun is likely to draw the Alien out if it is lurking nearby, as well as drawing the attention of nearby hostiles.

It's located in the baggage area, in the lap of a dead man. It is only obtainable once you've progressed late into the game. Unlike story items, it is possible to leave it behin.