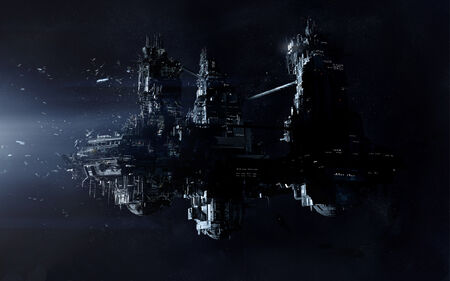 The Sevastopol is a permanent freeport and trading space station owned and operated by Seegson Corporation. It is situated in orbit around the gas giant KG348 on the frontier of human space, somewhere near Zeta Reticula.

Sevastolink is the Sevastopol's internal electronic communciations system. It's primarily text based, although it can also deliver audio files. The system is provided by LM-Link, a company that also provided the internal messaging system for The Torrens.

Despite Seegson's high hopes for the future of their business in the frontier, Sevastopol did not perform to expectations. Seegson put the station up for sale and, when various attempts failed, slated the station for decommissioning.

The deconstructed nature of the base suggests that this process has already begun, and the various items left in the open can be attributed to this as well. While the station was mostly uninhabited (the decommissioning was to be done with a "bare bones" staff), it is still populated by the Working Joe automated androids and worked by the APOLLO Central A.I.

The following document discovered in-game sheds some light on the decommissioning of Sevastopol.

We've had a long journey together but sadly it's coming to an end. Seegson Corp would like to take this opportunity to thank all of you who worked and lived at Sevastopol over the years, and hopes that Seegson has helped to make it a productive and rewarding environment. Our investment and belief in the station has never wavered.

Be assured that Seegson's APOLLO central A.I. and 'Working Joe' androids will be there to serve Sevastopol until the last rivet is removed. We wish you all the very best for the future. After all, Sevastopol isn't just a station, it's people.