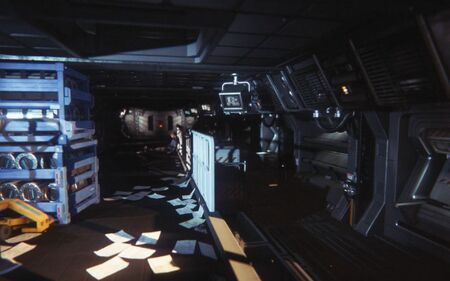 Though the bulk of Alien: Isolation takes place aboard the Sevastopol, there are various other locations which are mentioned in documentation and cutscenes.

A decommissioned space station owned by the Seegson Corporation, a European conglomerate synthetics manufacturer. It was a contact station for long-distance freighters, and was the resting place for the flight recorder data from the USCSS Nostromo. It is where the majority of Alien: Isolation takes place.

Registration number MSV-7760. The Torrens is a Weyland-Yutani Corporation ship tasked with the retrieval of the USCSS Nostromo flight recorder. It features two decks, an interstellar communications antenna, and a long-haul hypersleep chamber; additionally, the Torrens retains a heavy duty tow cable from before its conversion into a commercial ship.

Registration number 180924609. The USCSS Nostromo is a modified Weyland-Yutani Corporation starfreighter. The Nostromo is considered a tug, utilizing a high-power wench and tow cable system. In the events of the film Alien, the ship was considered lost. Nearly 15 years later, it is the focus of Alien: Isolation.