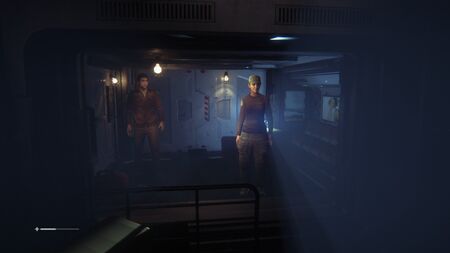 The Sevastopol is a dangerous place populated with various threats. Though the main threat in Alien: Isolation is the titular Alien, the various human enemies encountered can be just as dangerous.

Once the Alien got on board the Sevastopol, APOLLO Central A.I. requested a comprehensive report on the station's well-being. Seegson Working Joe 937, designated as "Chuck", reported that he had "received multiple notifications of civilian trespass and vandalism on Seegson property. Since the incident, there has been a marked increase in civil disobedience."

In response, the A.I. launched a defensive protocol, which continued through the presence of Amanda Ripley and the crew of The Torrens.

Because of this, the various humans on board comprising the crew split into various sections and groups, and proceeded to generate significant infighting. Many groups vied for power, as they distrusted the Marshals, a group of interior security designated for the station. Throughout her travels, the various human enemies will either attack Amanda Ripley on sight or warn her off prior to opening fire if she does not move away quickly enough.