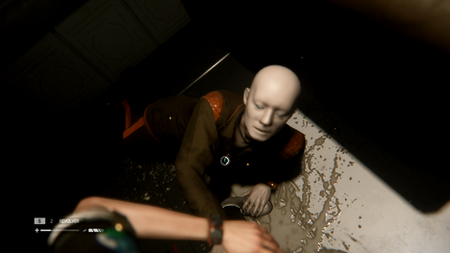 The Sevastopol is a dangerous place populated with various threats. Though the main threat in Alien: Isolation is the titular Alien, these enemies are just as menacing and deadly.

Automated synthetic working androids. They have been set to a defensive protocol upon the appearance of the Alien aboard Sevastopol Station. Not all are immediately hostile, though all have the potential to be.

The Working Joes' health and hostility depends on what difficulty the player is on. On Hard difficulty , the Working Joes can take an extreme amount of punishment before being destroyed. It is advised not to use firearms on working joes nor taking them head on with melee. A Working Joe's weakness is being stunned with the EMP Mine or the Stun Baton, then finishing it off with melee.

There is another variant of the Working Joe that is most commonly known as the Reactor Joe/Apollo Joe. These Joes can be distinguished with their Hazmat-like suits that enable them to be fireproof and shockproof , they also are granted 50% resistance to firearms and melee (meaning you need twice the ammo or hits to take them down).

The easiest way to kill a Reactor Joe[]

A: Hit it with a direct head-shot from the Bolt Gun.

B: Even though they are shock resistant , you can still stun them by hitting them in the face (Its the only open part) with the shock baton and them beating them. It should be noted, however, that due to their high health, the stun will wear off before you can kill them, and they will retaliate. Just repeat the process about 2-3-4 times and you should be fine.

The artificial intelligence which instructs and manages the Working Joe series of androids per corporate directives.